Home audio coming product Coming to you JUST before YR2010

Coming to you JUST before YR2010 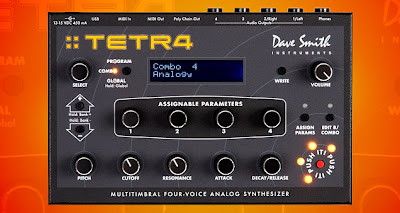 Two-time technology chart-topper Dave Smith remains in the Top 5 for a third year simply because he makes honest-to-goodness real analog synths at a price within reach of pretty much anyone who’s serious about their studio.
Tetra takes the voice of last year’s hit, the Mopho, multiplies it by four, then throws in USB control for tighter timing.
Best of all, each of those voices can have its own completely unique sound, making Tetra the equivalent of four Mophos – in a package that’s exactly the same size.

Overview
Tetra is our next-generation analog poly synth. Tetra takes the award-winning sound and features of Mopho, multiplies them by four, and packs them in a box less than half an inch larger!
Tetra has multiple personalities. It is a four-voice, analog poly synth, a sort of “mini Prophet.” It's a four-part, multitimbral synth with separate outputs, essentially four Mophos in one very compact box. And it’s a voice expander for other Tetras or the Prophet ’08.
Outside the BoxPhysically, Tetra is similar to Mopho, with four assignable parameter controls per program and a row of controls dedicated to the most commonly used performance parameters. All of the parameters can be accessed from the front panel and Tetra is fully programmable. A free, downloadable editor is available for Mac OS and Windows to facilitate more comprehensive tweaking.
Most of the rotary controls are detented encoders, but Cutoff and Resonance are potentiometers, allowing full sweeps with a single turn. The Push It button is a manual trigger to play notes and latch sequences on without the need for a MIDI controller.
Audio is output in mono, stereo, or per voice, via the four audio output jacks. There is also a headphone out. MIDI communication is by standard MIDI in and out jacks or USB. Poly Chain Out is a special, dedicated MIDI output to chain multiple instruments for increased polyphony.
Under the HoodThe voice architecture is based on the Prophet '08, but with the addition of a sub-octave generator for each oscillator and a fully programmable feedback loop for each voice. That breaks down to two DCOs, a resonant low-pass filter, three DADSR envelope generators, four LFOS, deep modulation routing, an arpeggiator, and a 16 x 4 analog-style step sequencer per voice. Feedback is capable of producing effects ranging from mild distortion to fairly extreme harmonic instability. (That's a good thing.) The possibilities are nearly endless. And the audio signal path is 100% analog.

In Program Mode, Tetra is a four-voice, polyphonic synthesizer with four banks of 128 programs. As with the Prophet '08, each program contains two layers—each layer is essentially a separate patch—that can be used to create keyboard splits or stacked sounds. Banks 1 and 2 are the Prophet '08 factory programs; banks 3 and 4 are a combination of Mopho and new programs.

In Combo Mode , a different program can be assigned to each of the four voices. Combos can be used for mammoth unison patches or for triggering up to four different 16 x 4 sequences—each with its own program—simultaneously. Combos can also be used to create "modular-style" polyphonic patches, where each voice plays a different program, with a slight variation on the same sound or even a drastically different sound.
In Multi Mode, Tetra becomes a multitimbral sound module capable of playing four monophonic parts on four MIDI channels, with separate outputs for each voice. Coupled with a MIDI sequencer and DAW, Tetra can play complex arrangements or analog drum parts with each part individually processed and recorded to its own track.
This One Goes to 12...and 16Up to four Tetras can be poly chained for eight, twelve, or sixteen voices total.
When used with a Prophet '08, up to two Tetras can be poly chained for a maximum of sixteen voices.
In addition, the Prophet's front panel controls map directly to almost all of Tetra's parameters, so the Prophet acts as a programmer and control surface. And a Mopho can be connected to Tetra's Poly Chain Out for five-voice operation.
Mopho Nominated for TEC Award! 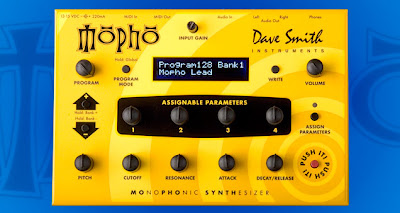 July 22, 2009—Mopho has been nominated for a 2009 Technical Excellence & Creativity Award in the category of Outstanding Technical Achievement, Musical Instrument Technology.


Overview
Mopho is a compact and affordable—but powerful—monophonic analog synthesizer. The voice architecture is identical to a single voice of the Prophet '08, but with a couple of unique twists to distinguish it from its award-winning sibling. We have added two sub-octave generators—one per oscillator—for additional girth and crushing basses. It also has an audio input that lets you process external audio and mix Mopho's own audio output back in pre-filter for feedback effects that can range from subtle distortion to extreme skronk. The Push It button is a manual trigger that lets you play a specific note or latch notes and sequences on. It can also step through a sequence to play short melodic lines without a keyboard. Of course, Mopho can also be used with a MIDI controller or external sequencer.

Mopho is fully programmable and all the parameters can be tweaked from the front panel. The four Assignable Parameters controls are assignable per program for optimum performance control. A free editor is available for Mac OS and Windows to facilitate programming. (And, if you already have a Prophet '08, most of Mopho's parameters can be controlled from the Prophet's front panel via MIDI!)

Mopho is perfect for people who want to learn the ins and outs of real analog synthesis without spending a bundle, DJs looking to add some old school sonic spice to their setups, and musicians who will appreciate a great-sounding, very portable mono synth.
Affordable, fully programmable mono synth with a 100% analog signal path.
Classic, real analog sound—including legendary Curtis analog low-pass filter.
Process external audio through the filter and envelopes.
Just 7.5" x 5" (19.05 cm x 12.7 cm).
Free editor for Mac OS and Windows.
Email us for more info. and pricings on DSI products!
Find them at our retail shop now!!